Arte
Book I: The Paradise Snare 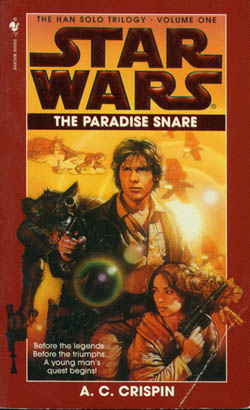 The story starts out 10 years before Star Wars: A New Hope--Han Solo is a teenager with ambitions to escape his rough past and prove himself as respectable: a top pilot in the Imperial Navy.

To work on his skills, Han gets a job as cargo pilot for the high priests of a cult. But the cult is interested in more than just spiritual enlightenment: it turns followers into a pool of slave labor. He soon learns that hokey religions are no match for a good blaster at your side.

The priests give Han a bodyguard/overseer named Muuurgh to keep him out of trouble and make sure that his actions are in the bests interests of the cult. Han soon learns the values of having a huge, intimidating friend as a partner.

Han also meets Bria, one of the 'pilgrims' of the cult, who becomes an important woman in Han's life. Together they work their way to Han's dream of making it into the Imperial Academy.

Along the way we discover many of the basic elements of the rogue we all know and love: how Han learned to understand wookiee and other languages, how he became such a great pilot, and, last but not least, his aversion to being called 'scruffy-looking.' 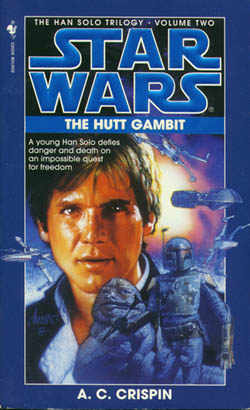 The Hutt Gambit starts five years after Book I. Han has just recently been kicked out of the Academy for freeing a wookiee slave named Chewbacca. The wookiee, claiming he owes Han a life-debt, just won't leave him alone, and Han soon relearns the value of having a partner to back him up.

Han eventually finds work piloting a ship for Jabba the Hutt. Jabba discovers what a valuable pilot Han is, and Han learns to increase his vocabulary with words like "your highness" and "your worshipfulness."

After saving up some money, Han acquires a ship from his buddy Lando Calrissian, and names it the Bria, after his previously lost love (bet you thought I was going to say a different name for the ship).

Throughout the book we meet an array of influential characters, most of whom lend a distinctive element to the future character we see in the movies. Memorable appearances by Boba Fett and Darth Vader show that Crispin is able to handle cameos without making them feel forced or contrived. 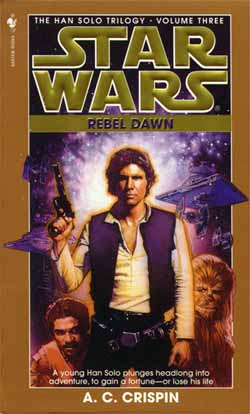 At the end of The Hutt Gambit, Han's ship was destroyed. With a small amount of credits and no ship, Han does the logical thing: he enters a sabacc tournament to gamble on his future. As we know from the movies, Han wins the Falcon in a tense game with Lando Calrissian.

With a new ship, Han makes his mark as one of the best smugglers in the galaxy, and fosters an almost friendly relationship with Jabba the Hutt. If Hutts were able to make friends, that is.

Also worked into this story is the time Han and Chewbacca spend in the Corporate Sector, which were accounted for by the Han Solo books written by Bryan Daley. While Han is gone, life continues for those he leaves behind. We see the Hutts plot and plan against one another, and what happens when Lando meets Han's old love Bria.

The book wraps up, quite appropriately, in the Mos Eisley cantina, where Han is about to meet Luke Skywalker and Obi-Wan Kenobi. The stage is all set for Star Wars: A New Hope.